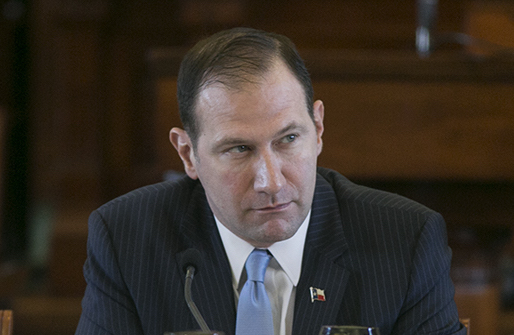 The University of Texas has concluded its inquiry into allegations that state Sen. Charles Schwertner, R-Georgetown, sent lewd texts and an explicit photo to a graduate student in August. While Schwertner and his attorneys proclaimed the senator exonerated, the report is in fact inconclusive, largely due to Schwertner’s own stonewalling.

The student, interested in working at the Legislature, met Schwertner at a university-affiliated event and began online communication, through LinkedIn and text message. Schwertner allegedly wrote to her, “Sorry. I really just wanted to fuck you,” “This is Charles,” and “Send a pic?” He also wrote “And I have more proof of life ;)” with a graphic photo (redacted in the report) said to be of his genitals. The student responded: “Please stop, this is unprofessional. I’m a student interested in learning about Healthcare Policy. These advances are unwanted.”

UT hired Johnny Sutton, the former U.S. Attorney for the Western District of Texas (which includes Austin), to determine if Schwertner had violated UT policies or federal Title IX requirements protecting the student. In the report, Sutton states he spoke with the student and hired a forensic investigator to examine the phones in question, and the report concludes definitively that the student did receive the messages in question and had reason to believe they were from Schwertner.

However, Sutton writes, he “repeatedly” requested to interview Schwertner, but the senator refused and also declined to answer five questions designed to “bring clarity to the investigation.” The senator “has access to information that could allow a more definitive conclusion to this matter, but is unwilling to share that information and the University lacks authority to compel him to investigate more fully,” wrote Sutton. Schwertner’s lawyers, David and Perry Minton, said in a statement that they had prevented the senator from participating in an “unfair” process that would not protect his confidentiality.

Sutton’s investigation revealed that the phone number Schwertner gave the student was attached to an account on Hushed, an app that allows callers to communicate without using their real cell phone numbers. The lewd messages were sent not from his primary cell phone but possibly from another device, which Schwertner would not provide. Through Schwertner’s lawyers, an unidentified third person, whose existence has not been proven, claimed to have accessed the senator’s Hushed and LinkedIn accounts and sent the messages without his knowledge.

“We recognize that it is plausible [Schwertner] sent the text messages and photograph from a device other than his personal cell phone and the third person claiming responsibility is being untruthful or does not exist, but we have no evidence to support those possibilities,” concluded Sutton. “It is also plausible that the third person who claims to have sent the text messages and photograph does exist and did in fact send them.” Because “available evidence” could not support the allegations, the investigator wasn’t able to conclude Schwertner engaged in actions that violated Title IX or UT policy.

Schwertner, elected to the Senate in 2012, has chaired the upper house’s Health and Human Services Committee; his website describes him as a “physician, family man, and life-long conservative.” The anti-choice stalwart drew criticism for infamously breaking a glass table last legislative session as he gaveled a pro-choice witness into silence. The Senate, which just updated its own sexual harassment policies, can conduct its own investigation into Schwertner’s alleged conduct; as of Tuesday evening, Lt. Gov. Dan Patrick’s office claimed to be reviewing the Sutton report.

Got something to say? The Chronicle welcomes opinion pieces on any topic from the community. Submit yours now at austinchronicle.com/opinion.