Skip Navigation
Home Blog Someone Illegally Changed a Texas Street Sign in Honor of David Bowie, and Officials Are Letting It Slide

Someone Illegally Changed a Texas Street Sign in Honor of David Bowie, and Officials Are Letting It Slide 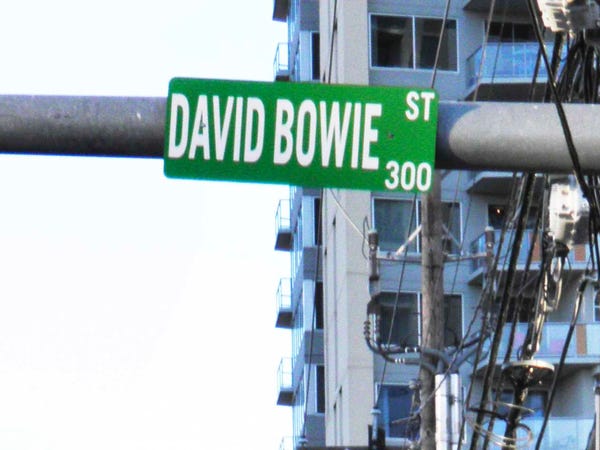 A sign for Bowie Street in the Texas capital of Austin, named for a defender of the Alamo, on January 15, 2016, after it had been changed to “David Bowie Street” to honor the music great who died a few days ago.

AUSTIN, Texas (Reuters) – A music festival organizer helped make the Texas capital of Austin a little bit funkier this week by putting up a skillfully crafted sign that dubbed a downtown road David Bowie Street.The city of Austin, none too pleased about what it sees as vandalism to a street named for Alamo defender James “Jim” Bowie, will allow the sign to stay up until next week to honor the British music great, who died a few days ago and wrote hits such as “Changes.”

“We appreciate Austin’s reputation as the live music capital of the world and recognize David Bowie for all he did for the music industry and more,” the Austin Department of Transportation said.

Roland Swenson, co-founder of the South by Southwest festival, put up the sign out of show of respect for the music great, a lawyer for Swenson said. The festival is a global event celebrating music, tech and film that attracts tens of thousands of people annually.

Swenson and a friend, who is a sign maker, attached a nearly perfectly produced and readily removable sticker on the street marker, Perry Minton, an attorney for the pair, told Reuters.

“They have told me they will bear all expenses involved in restoring the sign,” he said.